You should hire a professional videographer for much the same reason that you use a professional wedding venue, dress supplier or limousine company. We have the skills and the experience.

We‘ve done it many times before, our product has been tested by previous customers, we‘re insured, we use quality equipment (with back-ups if something goes wrong)… We know what we‘re doing

Watch The Birdie has the skills and experience necessary to professionally record and edit your wedding footage to the high standard you would expect.

We film all forms of weddings including religious, humanist, registrar and civil partnerships, in all types of locations including castles, hotels, houses, marquees and clubs, right across Scotland, including Fife, Edinburgh, Glasgow, Aberdeen and Inverness.

We‘re just a phone call or email away…

What we do on the day

Set out below is an example of what a typical day might look like. We‘ve highlighted the key points in the day to give you an idea of the sort of things we do and when! I have assumed a Bride and Groom but the same will apply to a same sex marriage.

This is a typical day but all weddings are different and have their own unique opportunities and challenges. Our considerable experience means that we can anticipate any problems and adapt our plans to deal with whatever comes our way!

The first thing we do is to establish where the ceremony is taking place and speak to the wedding co-ordinator for a final check on arrangements.

Then it‘s out with the cameras so we can get what we call establishing shots. We will take a wide variety of shots of the venue, from distant to detail, and from static to moving.

The guests soon start to arrive so it‘s the ideal time to capture the happy and welcoming mood. It‘s also a great opportunity to capture the Groom and groomsmen getting photographed.

We want to make sure that the ceremony can be heard loud and clear so we mic up the groom and celebrant as well as any muscicians you have chosen, such as a string quartet or equivalent.

One of the highlights of the day is, of course, the arrival of the bride and bridal party. We make sure that we‘re on hand to capture this special moment.

And now to the main event! The most important part of your day is generally filmed with three cameras placed to get shots of the Bride, Groom and Celebrant.

We ensure that we get shots of the newly married couple as they leave the ceremony and head out for a group photo. Then we capture the happy, congratulatory mood before taking some more detailed shots of guests and the bridal party.

We film the reception room for use in the wedding film intro - both wide shots showing the whole room and more detailed shots of individual touches such as flowers, favours etc.

We want to make sure that all of the speeches can be heard clearly so we mic up everyone speaking, either with tie mics or a table mic depending on the circumstances i.e. we wouldn‘t use tie mics if the bride is speaking.

During the evening, we will either film the evening guests arriving or film the guests leaving messages of goodwill or take some more shots of the venue.

We want to make sure that we capture that first dance in all its glory so we film the dancing using two cameras - one wide angle and one zoom lens.

We usually wrap up at around nine leaving you to dance the rest of the night away...

Examples of our work

Below you‘ll find examples of our work

We have a lot more examples of our work on our YouTube channel, please feel free to take a look.

Watch The Birdie like to do something a little different.

This is a lot of fun for the guests to take part in and leaves a fantastic memory of the wedding day. The couple choose a track (with guidance from us) for the guests to lip sync to. This is organised on the day by our own choreographer and filmed by our cameraman. We try and do this in the afternoon but it can also be completed before the first dance.

We have our own fully licenced drone pilot available to give a different perspective of your venue. We can get amazing aerial shots of extremely high quality and stability from a range of different drones at our disposal. If appropriate we can also use the drone to film some truly unique and special shots of the bride and groom. 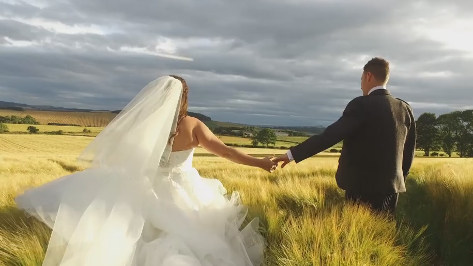 This is a great piece of entertainment for later in the evening, particularly if it‘s a small ceremony and there are a lot of evening guests. An edit is put together during the meal and early evening and then shown on a large screen during the buffet break. This also means that the bride and groom walk away with a ten minute edit of their wedding at the end of the day. 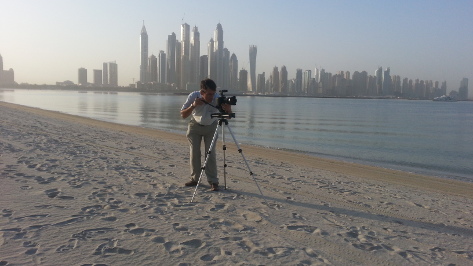 An extra cameraman captures even more footage of the day to ensure that not a moment is missed. It also gives more dedicated footage. Whereas an unmanned camera will be set on a wide view to capture the panorama of the day, a manned camera can really focus in on the action.

We always offer a very competitive price, based on your needs for the day and any options or special requests you have. We go out of our way to be as flexible as possible. Our Pricing is based on a number of factors that include location, time of year and weekend or mid-week event.

Please contact us by phone or email (or meet us at a show/exhibition) to discuss what video services you need for your Wedding Day.

If you‘re not 100% sure what you want regarding the Wedding Video, then we offer a free hand-holding service to discuss your options with the aim of finding a happy match between your video budget and a Wedding Video that meets your wishes.

We‘ll ask you to choose a selection of music tracks for the relevant parts of your wedding film. We‘re happy to advise you on which tracks work and which don‘t. If you want us to choose them all, then that‘s fine too. Any subsequent changes after delivery are chargeable.

The duration of your wedding film is usually between one and two hours long, being dependant to a great extent on the lengths of the ceremony and the speeches, and any customisations or extras you may chose.

£100Morning Preparations
Filmed at the Bride or Groom‘s location.
£75 per hourFilming after 9pm
Covering all the dancing action right up to the last dance.
£3002nd cameraman
To help provide comprehensive coverage of all the action.
£200Evening Video Highlights
A projection screen premiere of the Wedding Day‘s video highlights to entertain all the Reception guests… and the Bride and Groom! Usually shown around Buffet time. (It‘s suggested a 2nd cameraman is be booked for this)
£500Marryoke
Make a choreographed pop video of your favourite song or movie clip, starring yourselves, friends and family. We provide a choreographer and cameraman to record this.
£150Drone footage
A fully licenced drone pilot will record stunning images from the air.
£15 eachExtra DVDs
Extra DVDs for gifts to family and friends.

If you have other options you would like included in the wedding DVD please let us know. We want to ensure you get exactly the video you desire.

A little about us

Watch The Birdie opened in 2005 and since then we have produced over 400 beautiful wedding films, each one as unique as the wedding couple themselves. Since these early days, our work has taken us all over Scotland and as far afield as Dubai and Austria. Our work has been recognised in the industry by being VOWS finalists in 2009, 2011 and 2015 and winners in 2009. We are also delighted to be recommended by many venues and photographers but we are most excited by the many recommendations we get from former wedding couples.

Oh and why Watch The Birdie? In the early days of photography, to attract the subject, a photographer would carry a mechanical bird that chirped and the phrase “watch the birdie” became a command at portrait sessions. 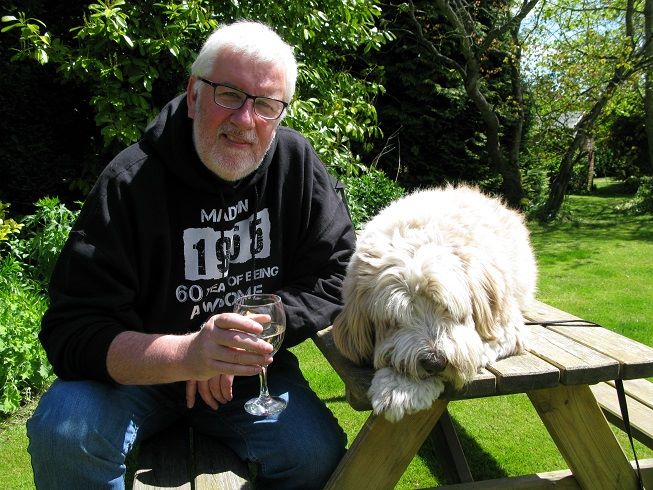 I spent more than twenty years firstly as an illustrator at Ferranti and then headed up the Multimedia dept at BAE Systems, where we produced brochures and sales literature and also did all the in-house photography and video. Leaving in 2005, gave me the opportunity to put these years of experience to good use in setting up my own business. With a broad skills set I decided to follow the filmmaking route and it‘s been a fantastic experience.

Being able to be the master of my own destiny is something I‘ve revelled in and I enjoy every minute! Being self employed, you tend to follow the path laid out ahead and that very quickly took me to specialise in weddings. Initially it was something I stayed away from, but being the director, producer, editor and cameraman allows you to make the films you want and that appealed. Winning the VOWS in my 3rd year was an indication I was on the right track. I look forward to the next 10 years. 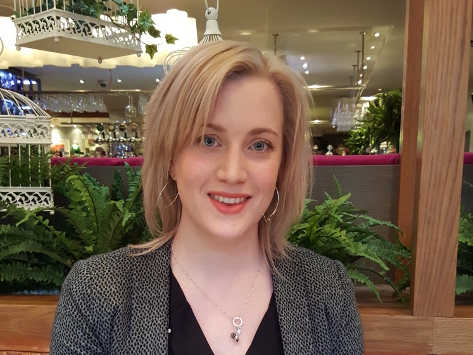 I‘ve worked with Vicki since 2013 and she quickly established herself as a great addition to the team. Her eye for detail, cameracraft and friendly charm is a huge asset on the wedding day and her wedding films are stunning. She can work as single shooter on the day, backup 2nd shooter or work on the Marryoke team.

Vicki graduated from Edinburgh College of Art in Film and TV with a First Class Honours (2010) and works in video within Communications and Marketing at the University of Edinburgh. 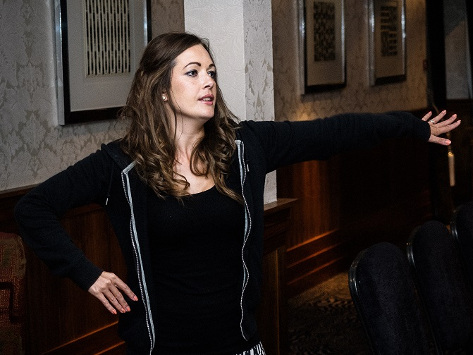 Clare joined the team in 2016 and works solely on the Marryokes. The difference she has made from me saying “do something” to directing the Marryoke is immense and for the first time we have guests coming back wanting to do more. She generally works with Vicki which allows the main shooter to concentrate on the wedding. 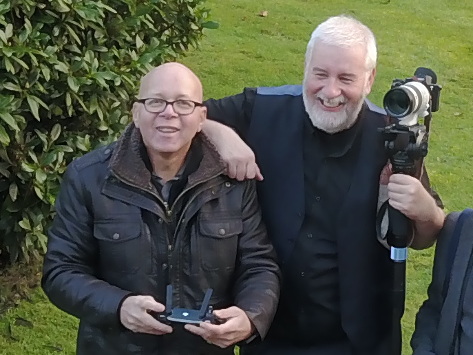 We had our own drone but it was essentially for our own use as a hobby. As we were about to go for the certified training we came across Eric. He is fully qualified and a drone expert - so much so that companies send him drones to evaluate. He has a range of drones and will shortly be investing in one fit for carrying DSLR cameras.